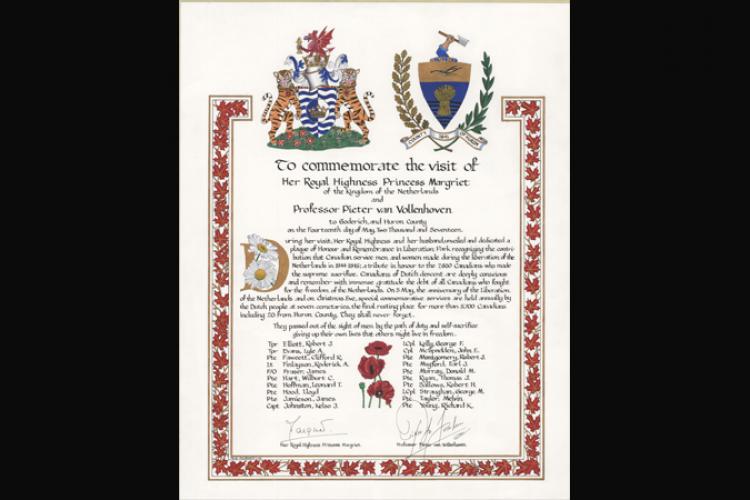 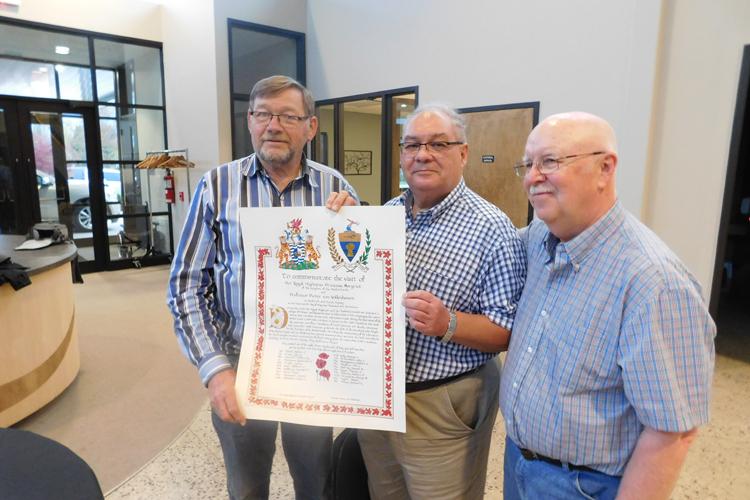 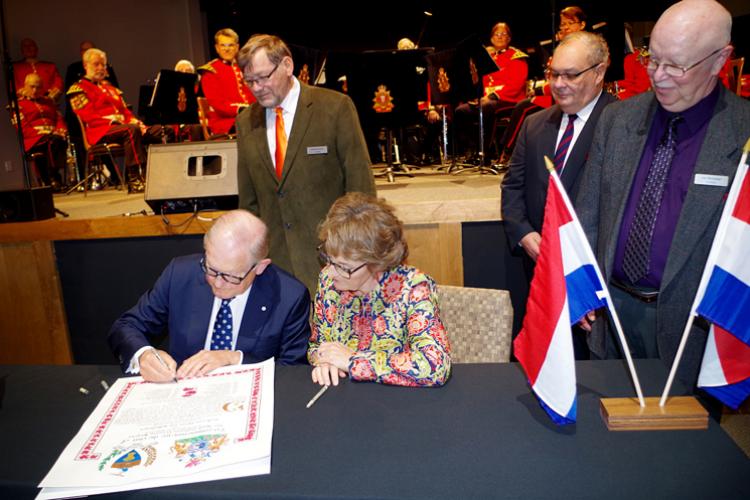 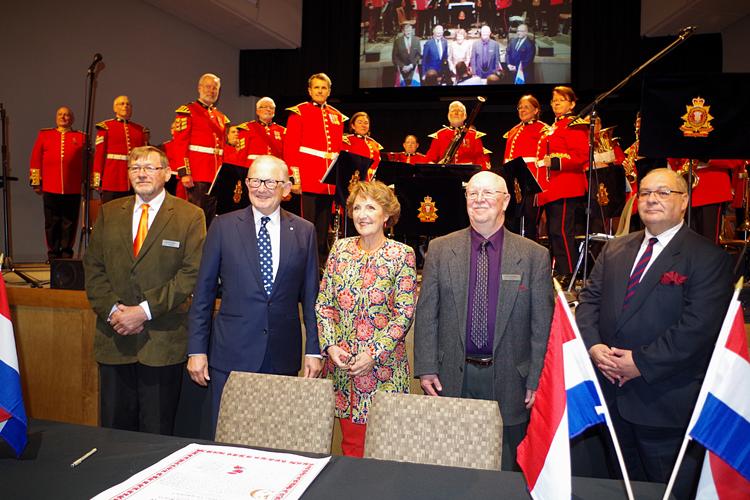 The scroll of remembrance, presented to H.R.H. Princess Margiet and her husband, Professor Pieter Van Vollenhoven for signature, is an original piece of heraldic artwork to commemorate the couple's official visit to Goderich, and to honour the "Huron County 20" who laid down their lives during the campaign to free the Netherlands from Nazi occupation.
The scroll includes the official seals of the Town of Goderich (seen on the upper left) and the County of Huron on the upper right.
Within the letter "D" on the middle left of the scroll are daisy flowers.  In Dutch the word "margariet" is a type of daisy flower.  The flower was worn as a secret sign of resistance during the Nazi occupation.

Finally, between the two columns of Huron County fallen, we see the poppy, a symbol of remembrance throughout the commonwealth. The poppy symbol has it's origin from by a poem written by Canadian soldier, Lt. Col. John McCrae, 'In Flanders Fields".

About the Scroll artist:

Mihail Murgoci, CD served in the Canadian Army Reserves for more than 36 years, most of that on full-time duty in various staff officer positions.

A member of the Royal Heraldry Society of Canada, he is a self taught professional heraldic artist who studied calligraphy while attending Upper Canada College.  He designs and creates illuminated scrolls, combining watercolour, calligraphy and historical integrity, for special occasions such as ceremonial parades, anniversaries, official dedications, VIP presentations, corporate retirements, and weddings. His customized work has also included menus and invitations to a variety of functions.

His vividly coloured scrolls of fine quality craftsmanship which reflect an uncompromising standard of excellence and authenticity have been presented as gifts to foreign dignitaries and to members of the Royal Family. They have been on display in Buckingham Palace, Clarence House and the White House. His art commissions are unique and rare as they embody together his dedication to many hours of painstaking research, intricate heraldic detail and elegant calligraphy.

He is also a historian who has conducted historical tours with a particular passion for the American Revolution, the War of 1812, and the American Civil War. His highly informative interviews have appeared numerous times on History Television. Now the regimental historian for The Royal Regiment of Canada, he assisted Don Graves, a noted Canadian military historian and author, with the production of the regiment’s new history book, “ALWAYS READY” that was released recently.

If you require further information, Mihail Murgoci can be reached at his residence in Toronto, Ontario at (416) 232-1829 or by e-mail at [email protected] .