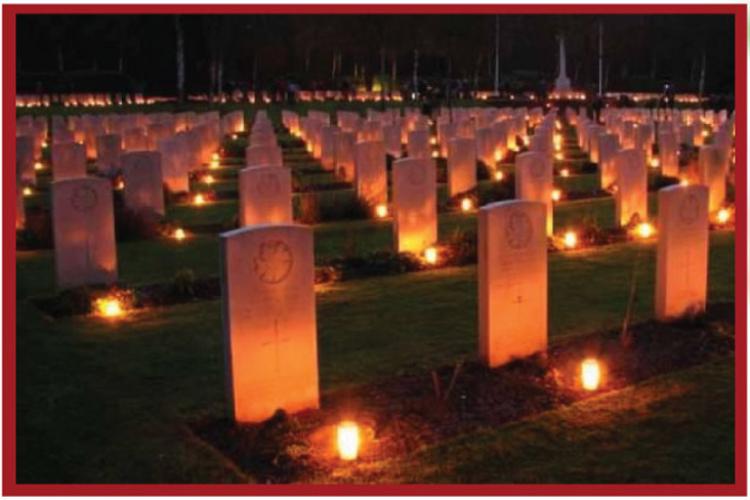 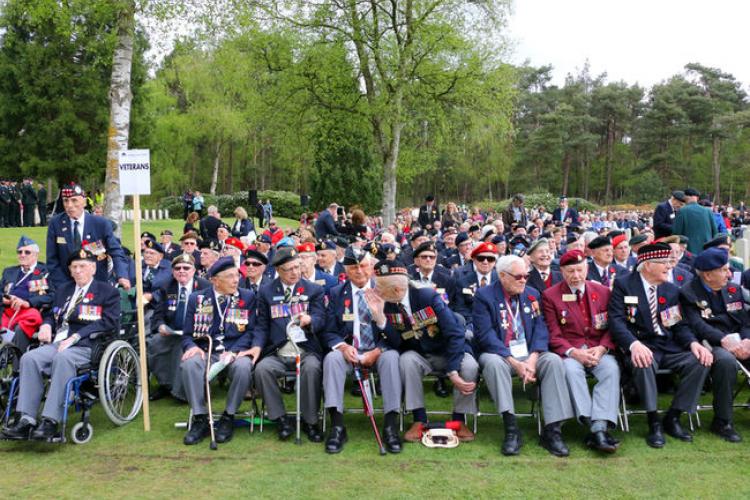 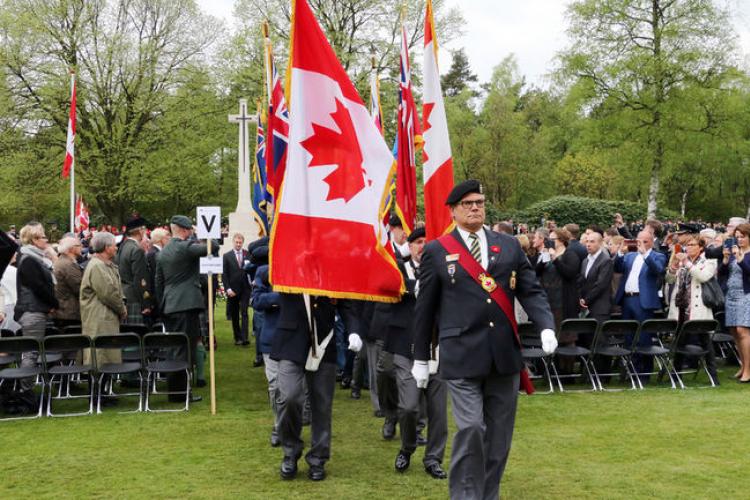 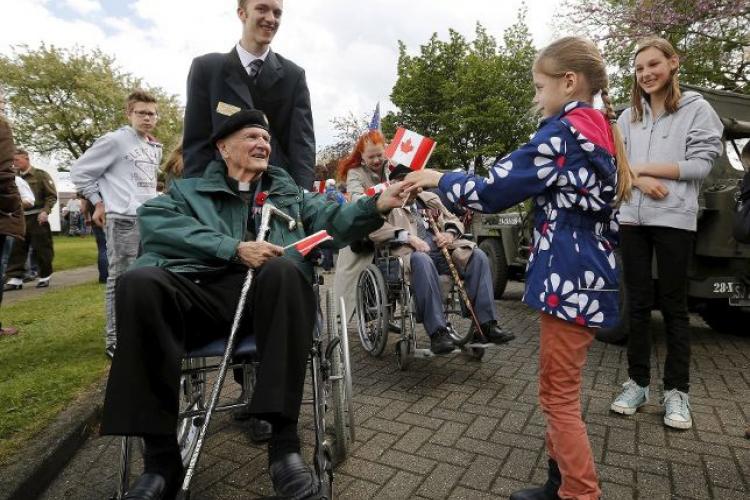 THE STORY OF HOLTEN WAR CEMETERY

At this cemetery for the past 70 years, officials of the Dutch Government, a member of the Dutch Royal family along with the citizens of the town of Holten have gathered on The Day of the Dead – May 4th. Also in attendance are officials from Canada and our Canadian veterans but 2015 may have been the last time our veterans will have been in attendance.

The crowd that gathered in Holten included many Dutch children who were addressed by Gert Jan Oplaat in a moving speech.  Click on the link below to hear what he said.

Address to the children at Holten, please click here.

Ladies and gentlemen, dear veterans, allow me to do my speech in Dutch because they asked me to talk to the young children.
Girls and boys.

How amazing that you are all here today. There are many different people here. Our Princess Margriet and her husband Prince Pieter van Vollenhoven, the Prime Minster of Canada, Stephen Harper, and other important people.

But the most important people are naturally the old Canadian soldiers we call veterans. These people are already very old; many of whom are more than 90 years.

Unfortunately, many other Canadian soldiers were not able to grow old. They fell during the liberation of the Netherlands. 1400 young soldiers are buried here in Holten.

Dear boys and girls, I would like to ask you a question. How many of you  watched the VoiceKids? (Similar to Canadian Idols for kids)
There were 5 boys and girls in the finals.
Robin, Rédouan, Joy, Robine en Lucas.
Who won? Lucas, that is right.
Who supported Lucas? Oh...some of you supported others.

Because in the war, when the Germans were playing the boss here, they said who you could or could not play with. It was dangerous to chose who you were going to play with. You could do nothing and had to stay inside in the evenings. You were not allowed to go to soccer or field hockey.

Our grandma's and grandpa's were frequently scared and wanted the Germans to leave. But yes, they did not do that on their own.

War is horrible, especially if you hear the stories of the old soldiers who survived.
I came here frequently as a child, together with Russell Jackson, a Canadian soldier that had survived the war.
We walked together along the graves of different soldiers. Stone for stone, we read the names and ages of every soldier. 18 years old, 21 years old, 25...19...18...All young people that would never live out their dreams.

Russell took my hand and squeezed it hard, so hard that it almost hurt. He started to cry and told me a story about what he had survived as a soldier. He asked me to share this everywhere to make sure people know that this must never happen again.

Russell was one of the first group of soldiers to come from Warnsveld near Zutphen. He was on his way with more than twenty other soldiers under the command of Lieutenant Higgins. At Groot Graffelt they stumbled upon a large company of German soldiers. Almost half of his friends were shot dead, including Lieutenant Higgins, leaving him as the sergeant in command.

After a number of heavy battles many of the Germans were forced to flee. Those few left behind hid behind the large beech trees at Hotel Het Jachthuis, just before Warnsveld. Suddenly the Germans came towards them yelling, crying and shooting.

It turned out to be the German SS-jugend, SS-youth. They also had to fight. But their uniforms were way too big. They could hardly hold up their weapons because of the weight. And they were totally drunk. They were drunk on German Gin, forced to drink by their bosses so that they would not be scared of the Canadians.

Russell found this to be the most difficult moment in his life and that moment stayed with him the rest of his life. But at the time Russell could not process it. Each year, crying, Russell would tell me again that he had to command his unit to shoot...shoot children 14, 15,16 years old...
German children also lost their lives in the fight, children without mothers or fathers, children who were forced to get drunk and who had no other choice.

Russell relived the war everyday in his head. Every night Russell woke from nightmares about it.
Russell's friend, Lieutenant Higgins, is buried here in Plot 1 Row H Grave 5. Go and visit it later.

Boys and girls, such horrible things happen in war. But thanks to the brave Canadian soldiers that is the past. When we are finished here with this ceremony, walk to the soldiers that are still here, the men with all the medals on their coats, give them your hand, a hug and say, "Thank you for our freedom".

When the next season of the VoiceKids starts again, think about today and think...fortunately I can chose who I want to support. That is freedom.

Account of Experiences at Holten, written by Jim Rutledge.

For years our Men of Honour have come to visit their pals of so long ago and when they do they are pained because they remember what they endured and what the peoples of Holland endured but they also remember their comrades and for a short period they are young men again. You would have seen the tears and the shaking hand as they paused at a grave site.

Another tradition has been the children of the area place a bouquet of tulips at each of the 1,396 Canadian headstones on May 4th and when they do so they pause and bow their heads because they know and understand it was these young men who liberated their country in 1944-45. As well on Christmas Eve the whole of the town go to Holten Canadian War Cemetery and on this night they place wind resistant candles in front of each grave and they light them. In the darkness all one is able to see is the glow of 1,396 candles. The people do not and will not forget our Men of Honour.

We would like to share with you the brochure displayed below, which is based on material compiled by Terry Copp and Mike Bechthold. "The Canadian Battlefields in Northwest Europe 1944-45: A Visitor’s Guide (2005)" was a joint project of the Canadian Battlefields Foundation and Wilfrid Laurier University, Waterloo, Ontario, Canada.

For additional information, you may contact the authors at www.canadianmilitaryhistory.ca or www.canadianbattleofnormadyfoundation.ca.  The authors gratefully acknowlege the assistance of the Directorate of Public Policy and the Directorate of History and Heritage, National Defence Canada and Veterans Affairs Canada in developing this historic document. Front and back cover photos are by Evert Stieber.

To view the full document in a pdf format, click here.